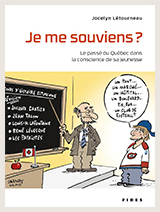 Contrary to popular opinion, young Quebecers do take an interest in the history of their society. They are capable of expressing a general overview of the trajectory of their community. They are the trustees of the historical experience of the Nous québécois. Drawing on an original body of work made up of thousands of answers to the question “If you had to sum up Québec’s historical journey in a single sentence or phrase, what would you say?” the author takes us to the heart of a fascinating study on the historical consciousness of the next generation.

One Book in Four Pages

The PDF documents below contain the primary materials used for the book:

A short history of the book

Every book has its own history. The idea behind Je me souviens ? dates back to the late 1980s. As a member of the jury for the Lionel-Groulx competition sponsored by the Institut d’histoire de l’Amérique française, the author became aware that the youth, invited to write an essay on the history of contemporary Québec, held a picture of the past that was largely structured by the “Great Darkness/Quiet Revolution” dichotomy. He sought to understand why this was so. From that moment on, the idea of the historical conceptions of young people has refused to let him go.1

As a father of four, Jocelyn Létourneau never fails to be impressed by the curiosity and intelligence of young people. He believes that we drastically underestimate their capacity for thoughtful consideration. The youth’s ignorance of and indifference to the history of Québec was a matter of popular debate in the province during the 1990s. The verdict was harsh: the young people were called a generation of amnesiacs, teens with broken memories, youth with no historical roots.

Puzzled by these opinions, which were often based on surveys of questionable construction, Jocelyn Létourneau came up with the idea of questioning the youth differently. In his courses at the Université Laval, he surprised his students with a fairly simple request – “Tell me the history of Québec as you know it” – and with a seemingly straightforward question: “If you had to sum up Québec’s historical journey in a single sentence or phrase, what would you say?” Year after year, he gathered stories and statements. Busy working on other projects, he had little time to examine his extraordinary collection, but he was slowly compiling a series of questions, hypotheses and concepts to which he intended to subject his data.

In the early 2000s, he convinced Sabrina Moisan, then just beginning her graduate studies, to extend the research by taking the survey to high schools and cégeps in the Québec City region. The brilliant student produced an excellent thesis.2 Moisan and Létourneau’s work formed the basis of an important article3 that had significant repercussions: not only was the text widely cited and quoted,4 but it led government decision-makers to re-examine the state of the historical understanding of young Quebecers. After the publication of this text, the supposed “ignorance” of the youth was no longer understood as an emptiness waiting to be filled but rather as a fullness that could be turned to account.

The reception of his idea encouraged Jocelyn Létourneau, in 2003, to undertake wider, more systematic documentary research. With the help of Christophe Caritey and a team of students, he used the same efficient method to gather hundreds and then thousands of narratives and statements from Québec youth living in a variety of regions and attending French or English schools. The statements compiled, which constitute one of the world’s largest collections of this kind, where then coded to extract the content. So far, only a few articles have been published analysing them:5 much work remains to be done, and the results promise to be fascinating.

The narratives produced by the youth offer almost inexhaustible source of raw data, and the statements they wrote are equally promising. Originally, Jocelyn Létourneau’s intention was to write an article about the statements, but given the wealth of the collection, the potential of which could never be fully exploited in thirty pages, he decided to write a book. This allowed him to analyse the statements from different angles and in the depth required of a study that would be meticulous, rigorous and ambitious and that would have practical applications for the teaching of history.

It takes time to produce a book: the author cannot be dedicated full-time to this single project. Developing a classification method for the sentences also required considerable time. And the classifications had to be validated, the assignment of each statement to one category or another had to be discussed, and so on. The original classification system developed by Jocelyn Létourneau was submitted to Raphaël Gani and Jean-François Conroy for input. After discussion, the final classification was confirmed, and on that basis the book was produced.

Here is a selection of articles published by the author or by other researchers that are related to the subject matter of the book.

The book has attracted media interest ever since its publication. The newspapers picked it up quickly. The author was interviewed on the air. What follows is an up-to-date list of reactions to the work, in the form of newspaper articles, interviews, mentions in the media or more in-depth journalistic coverage.